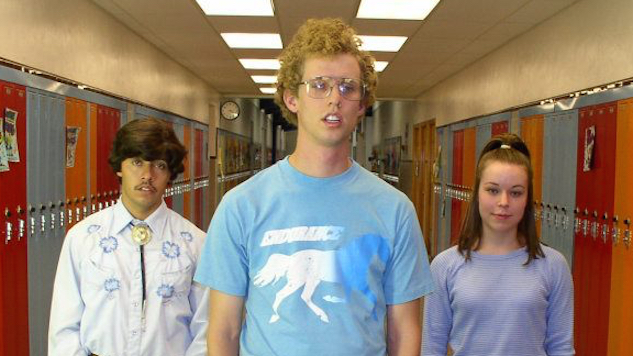 It was sometime in the middle of 2005 when the name ‘Napoleon Dynamite’ began registering in my brain enough for me to actually devote energy into finding out what it meant. Released the previous summer, the film had already become an independent cult classic, and as more and more people were talking about it, I became curious. Everyone else I knew had already seen it. Good grief, even my own parents had seen it by that time. And then, one night, I found myself sitting in the home of my old pal Christopher Jones, being forced to watch it. I’ll admit, I didn’t entirely get the humor during that first viewing. There were parts that I found really hilarious, but just as many that made me cringe with awkwardness, or feel genuinely sad for the characters. Watching the movie is almost like experiencing a symphony that hits these three notes over and over again. Hilarious, Awkward, Sad… Hilarious, Awkward, Sad… Hilarious, Awkward, Sad… But something has happened to me in the years since I first watched Napoleon Dynamite – something that has made me unable to watch it now without a huge, unquenchable grin on my face the entire time.

Napoleon Dynamite takes place in the rural town of Preston, Idaho – a place that feels like it dropped anchor in about 1987 and was then dragged kicking and screaming through the 90s before washing up in 2004. The story centers around the lives of three high school misfits who find friendship in each other. Napoleon, Pedro, and Deb have a variety of mild antagonists to deal with. These include the ‘popular’ crowd in their school, Kip – Napoleon’s older brother who spends most of his time chatting online with his internet girlfriend, and Uncle Rico – that sleazy relative who shows up unannounced and wreaks havoc in the lives of his family because he peaked in high school and is miserable that life has been nothing but a downhill slide ever since. Together, the unlikely trio of heroes form a bond that allows them to overthrow the established social order of high school politics. When we first meet Napoleon he’s the archetypal teenage loner, constantly over-exaggerating in order to impress those around him into liking him. He’s the guy that (if we’re honest about it) we all would have made fun of, laughed at, and generally avoided if he was a real person that we knew in high school, regardless of whatever social pond we were swimming in at the time. But Napoleon has a pure heart, and in his innocence he attracts the affection of Deb who accepts him for who he is. As his confidence gathers momentum he’s able to let his guard down, shrug off discouragement from his family members, stop bragging about his imaginary ninja skills, and clinch Pedro’s run for class president by channeling Jamiroquai in a public display of dance moves that brings the entire school roaring to their feet in applause.

And I’ll be completely honest with you. Even though I’ve just done my darnedest to give a brief, satisfactory summary of this movie – nothing I’ve said or could say about it will truly do it justice. It’s in a genre of its own. It completely defies all attempts at standard categorization. It laughs at professional critical analysis, and it scoffs at conventional comedic movies. If you’ve never seen it before, gather the whole family (it’s safe for all ages), make some popcorn, and let Napoleon Dynamite transport you to the most familiar-feeling parallel dimension that you’ve never been to.

I give Napoleon Dynamite 4 Coffstars