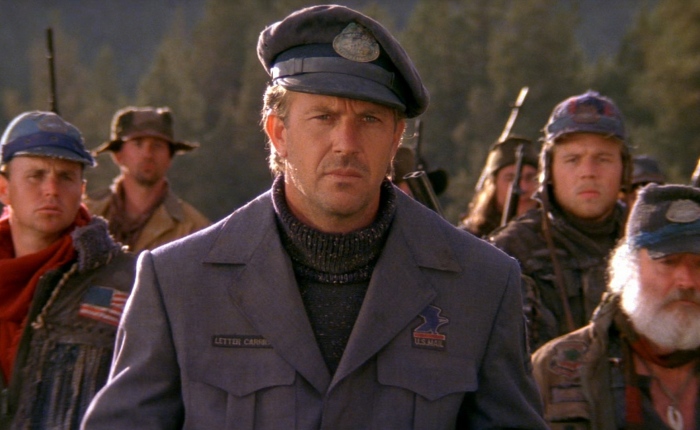 It was Christmas Day 20 years ago when movie theaters across this great land opened their doors to Kevin Costner’s trinimatic masterpiece—The Postman. Yes, I just invented an adjective to describe this film, because inventing new words like “trinimatic” is one of the things I’ve had to do in order to properly survey and review this man’s career. I call The Postman a trinimatic masterpiece, not because it’s a great film, but because it took Costner the Producer, Costner the Actor, and Costner the Director in order to create it—a trinity if you will—three in one. What makes this even more interesting is the fact that, aside from being released on December 25th, it’s also a film with a very specific “messiah” themed allegory running through its many plot holes. It’s not a pure messianic theme. It’s very awkward, very clunky, and it contains some extremely odd story elements that I won’t go into here, but at its core, it has an undeniably obvious “Jesus” flavor to it all. There’s an unlikely hero, a dramatic villain (named General Bethlehem… not sure where to go with that), a ragtag band of disciples, Tom Petty playing himself (may he rest in peace), a mule, a revolution, and at the center of the whole shebang: a pregnant woman with an assault rifle. This movie recipe can work quite well if done with enough tact and cleverness—poor a glass of sci-fi, add a little Jesus, sprinkle in some good old fashioned American patriotism, stir until blended, and serve. The problem with the messianic theme in The Postman is that it’s much more cumbersome than it is clever. But I mean look, this movie is about a mailman who saves humanity by DELIVERING THE MAIL. They had to do something to make it interesting. Still, it’s a good recipe—and this storytelling pattern works pretty good with a variety of different genres.

Side-note: Someone should make a movie called “The Grillmaster,” about a guy who brings civilization back from post apocalyptic destruction by wandering from town to town instructing his disciples on how to properly make barbecue.

I don’t have much else to say about this one. I like to keep things as positive as I can, and the more I try to dig into this, the less positive it’s going to be. It’s clearly not the man’s best film. But at the end of the day, I really think Costner was trying to make a movie about hope. It may come across as pretentious and awkward, but I can’t fault the man for trying to inspire people with a little bit of hope. Know what I mean?

We have finally arrived at our destination. We’ve reached the end of the line on this journey down the Costner Trail. I haven’t done these reviews in any specific order, and I’ve obviously only done a selection of Costner’s most notable films. Likewise, I didn’t plan on The Postman being the last film to review in this series, but this is just how it came together, as anti-climactic as it may be. There’s plenty more where this came from though, including a few more westerns, a few more sports dramas, a film with Ashton Kutcher called The Guardian that’s pretty decent—and there’s also 3000 Miles to Graceland where the two Wyatt Earps Costner and Kurt Russell joined forces to play the long lost gangster sons of Elvis Presley–I can’t in good conscious recommend that one, but I just wanted to point out that it exists. Thirteen Days is probably the best movie of his that I haven’t written about—it’s a very interesting look into the Cuban Missile Crisis in case you’re interested.

On a personal note, this whole endeavor has been a good writing exercise for me. I don’t really watch a lot of TV, unless someone recommends something to me. I generally prefer to watch movies. I like to watch at least one movie a week just to unwind a little bit. I also like to write, so writing something about the movies I watch is a great way for me to combine my hobbies I suppose. If you’ve kept up with my reviews, I really appreciate it. Thank you for reading my stuff.

In the words of Kevin Costner: “You just do the things that you love and see if other people can like them too.”

2 thoughts on “The Postman”