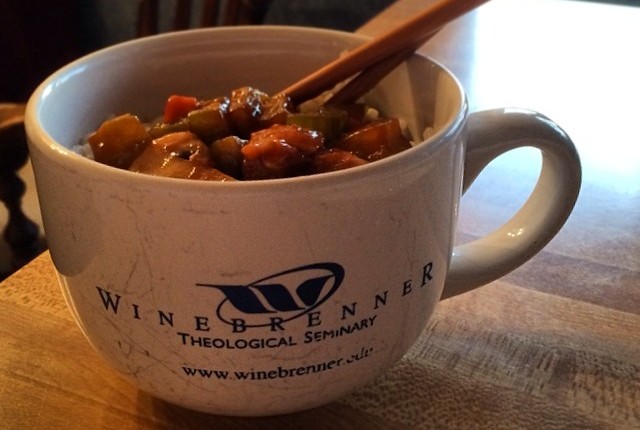 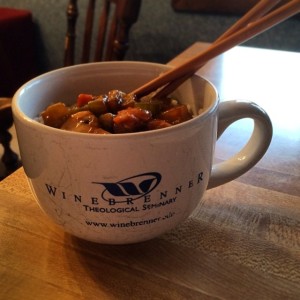 As one of the previous Curry House regulars pointed out yesterday, sometimes these mugs have seen a little more than just coffee and tea. Such is definitely the case with this Winebrenner mug, which has seen its fair share of rice and curry.

It’s hard to think about my time in the curry house without also thinking about Winebrenner–together the two occupied nearly all of my time between 2008 and 2010. We were always grateful that the professors and staff at the seminary encouraged us so much, with many of them even finding occasion to come to our house themselves and share in our weekly curry night meal.

I think what is most interesting to me when I think back on curry night, is that none of it was planned. The four of us guys who lived in the first incarnation of the Curry House had already been cooking and sharing Indian food with our neighbors for years prior to us moving to Findlay. It’s just what we liked to do. It was hard to explain that at times, especially when leaders and pastors from some of the other churches in town would come to visit–always looking for the secret of our success; always wanting to figure out how to duplicate what we were doing. We always told them the same thing… The truth was that we really didn’t know what was happening most of the time, or why. I moved to Findlay so I could attend Winebrenner without having to commute four hours there and four hours back every week. I didn’t expect (none of us did) that within a few months of moving, a hundred people would be coming over to our place for dinner. It was not always that convenient, and there were many times when we didn’t think we could keep doing it (it was kind of expensive for four graduate students), but we continued on, putting ourselves into God’s hands and trusting him to provide–and of course he did. In four years we never had to call off the meal.

For those out there wondering how to do ministry… It’s not as complicated as we’ve tried to make it. It might include going to bible college or seminary, but it doesn’t have to. All you have to do is look at what God has already given to you, and then share it with those around you—for free!